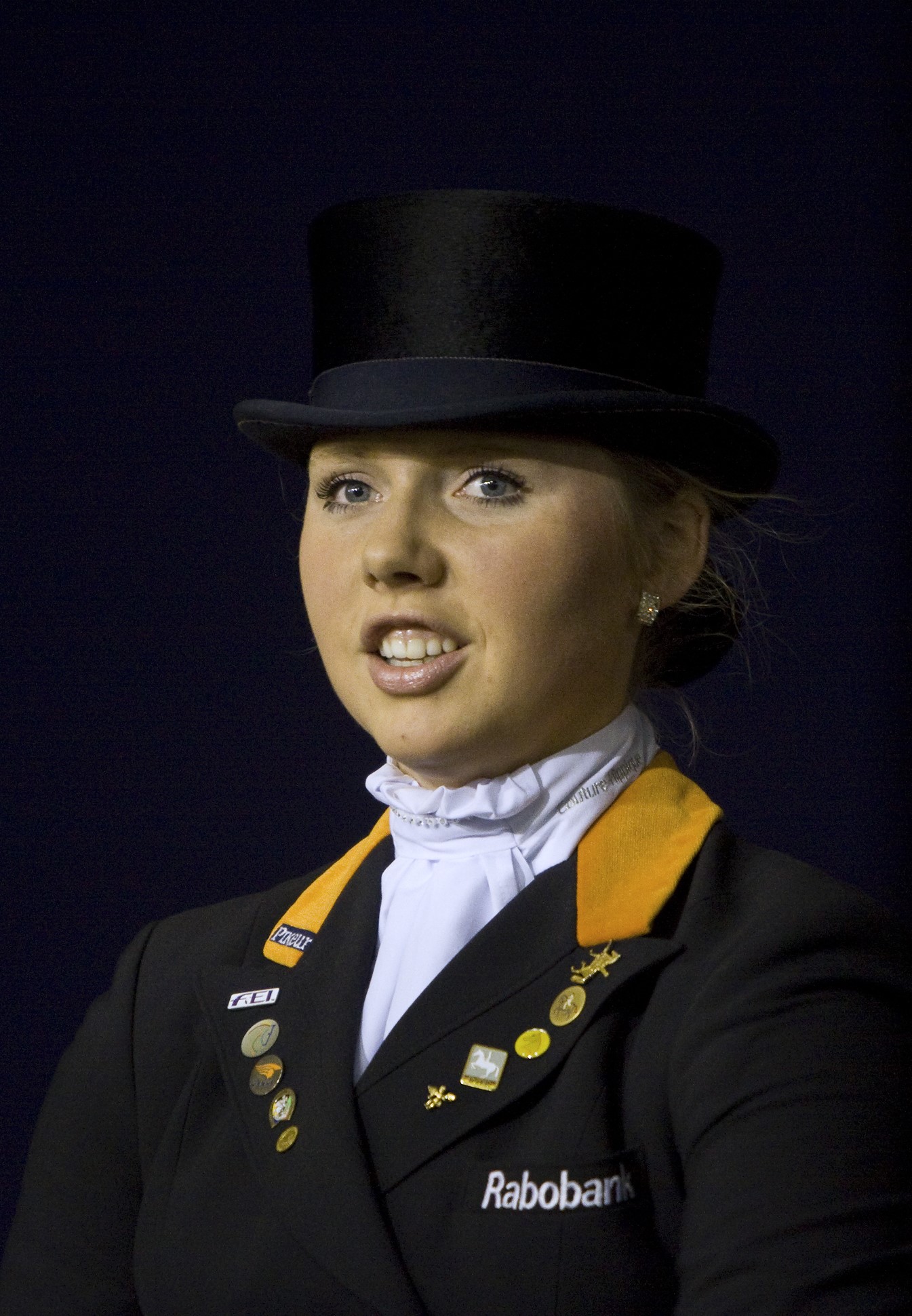 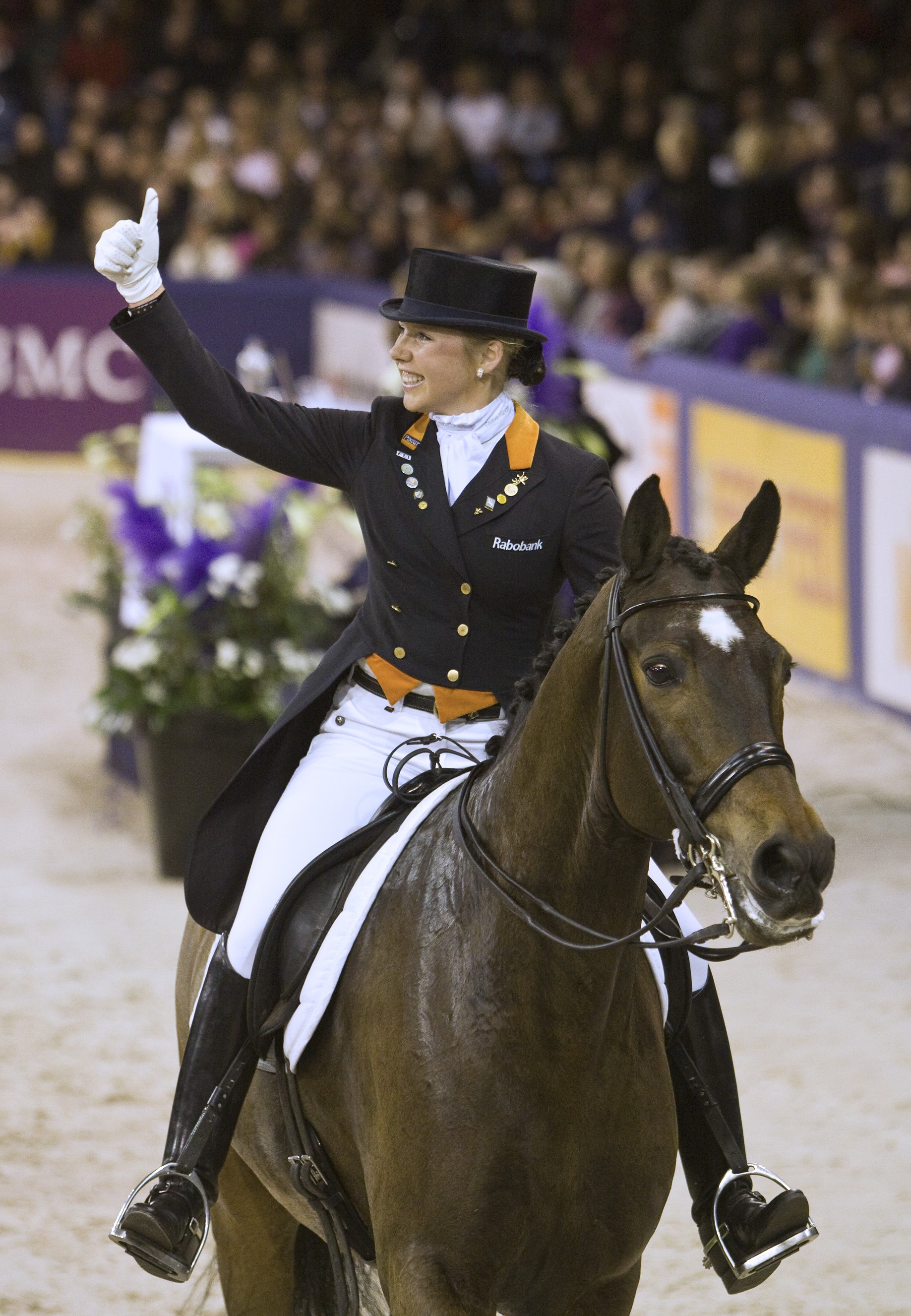 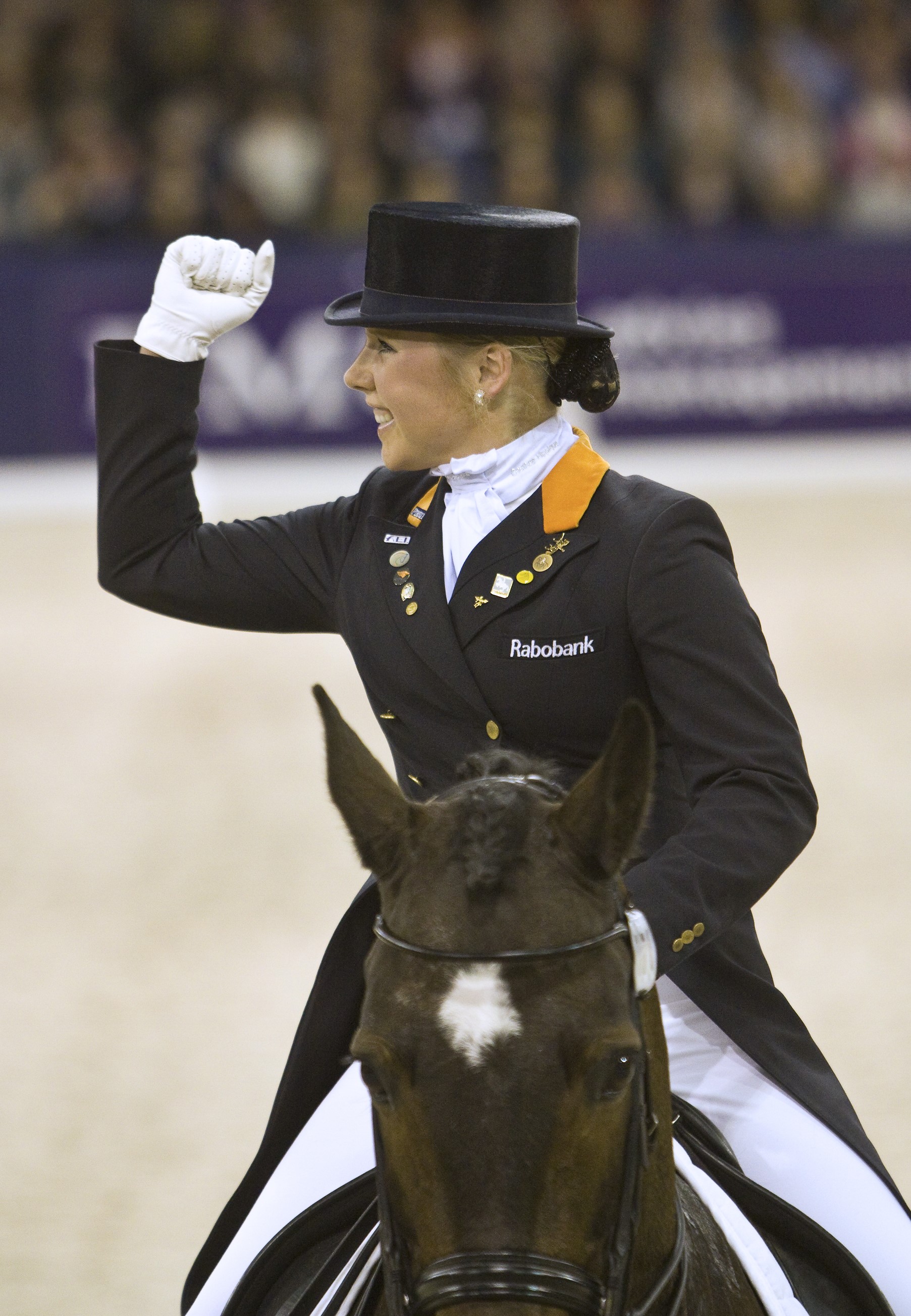 Jenny started riding at the age of six at manege Laar, a local riding school only five minutes away from her home. For her parents it was a mystery why she felt so attracted to horse riding, as they had never ridden before. After a few months, Jenny started asking for a pony of her own. Her parents managed to postpone this until Jenny was nine years old, but then there was no holding back anymore. They found a lovely brown C-pony named Silver advertised in the local newspaper and when they went to look at her the next day, everyone was sold on her.

Silver was the sweetest pony that existed and Jenny got her first show experience on her. It started with “Bixie” (an introduction class for children), where you had to do an easy test and had to show your skills of handling your pony. After a few months Jenny made the transition to “real” tests. In her first outdoor season she made it to the Regional Championships and she won a silver medal. From then Jenny was hooked on dressage! Of course she did an occasional jumping show, but dressage is what she loved!

After a few years Jenny outgrew Silver and made the transition to E-pony, Guinivere. Guini already had done Z2-level shows with her former rider, Monique, and was the ideal learning pony for Jenny. Within one year Jenny went up from B-level to Z2. Guini was actually bred as a horse, but stayed too small. After a few years, Jenny decided to compete in big-horse shows with her as well. 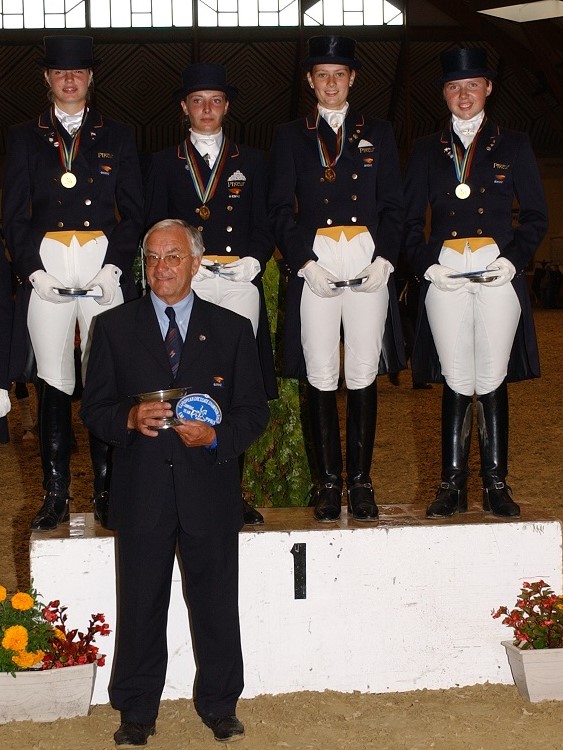 In November 1996, Jenny had moved her horses from the riding school to a private location, which is where Dressage Stable Schreven is today.

At the age of 13, Jenny made the final step from ponies to horses with Kennet W, who was bought just a few months earlier as a 5 year-old in April 1997. Kennet turned out to be a big challenge! Although Jenny had some experience at Z-level dressage, Kennet was not an easy step forward. It took months and months of training to get him a little bit under control. Together with her teachers and parents, Jenny persevered, and not without effect! In 2000 Jenny (15) made her debut at a national Junior-competition with 8 year-old Kennet. It was not a big success, but that did not discourage them. On the contrary, it made them even more determined! A couple of months later they debuted at their first international show CDIJY Babenhausen, Germany. Many more would follow!

In the meantime, more horses came to the stable and the stable’s facilities
expanded. Jenny already knew that she wanted a career as a professional dressage rider, but her parents insisted that she should finish high school first.

In 2002 Jenny almost made it into the junior team for the Europeans and the year after, in 2003, she succeeded! The Dutch squad went to Saumur, France with the goal of a medal. Nobody ever dreamed they would come home with Gold! For Jenny personally this was also a really successful event. With an individual 4th and two 5th places, she performed above expectations and contributed greatly to the team’s Gold medal.

2004 was the year Jenny and Kennet promoted to the Young-riders level. It was a big step and Jenny just missed the team and ended up being the teams’ reserve. A big disappointment of course!

They took revenge in 2005. That year the Europeans took place in Barzago, Italy. It was a two-day journey and Kennet had just recovered from an injury, so the preparation was not ideal. But the longer they were in Italy, the better in shape they got. The team won the Silver medal and Jenny individually won the individual consolation prize. It was a very proud moment when they played the Dutch anthem. 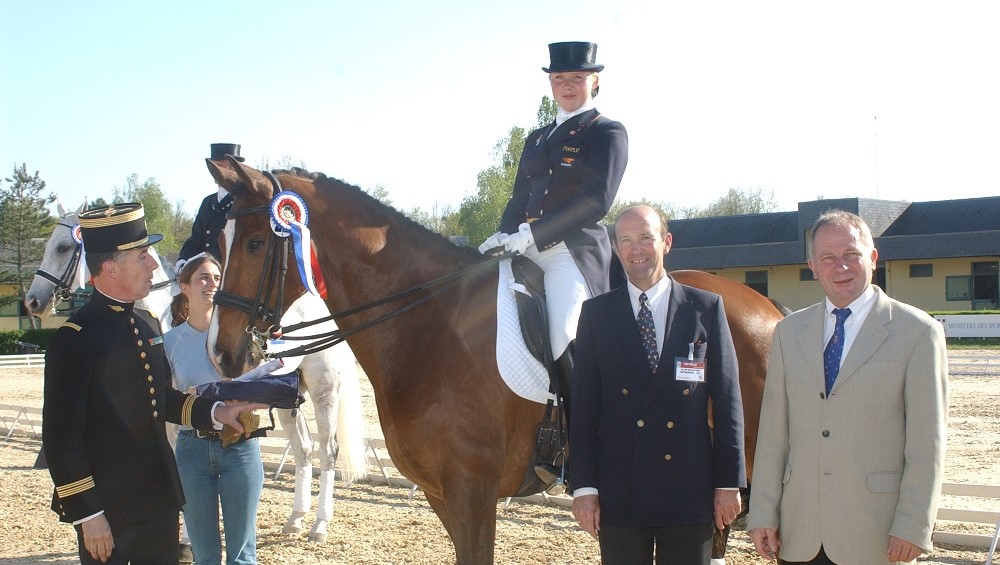 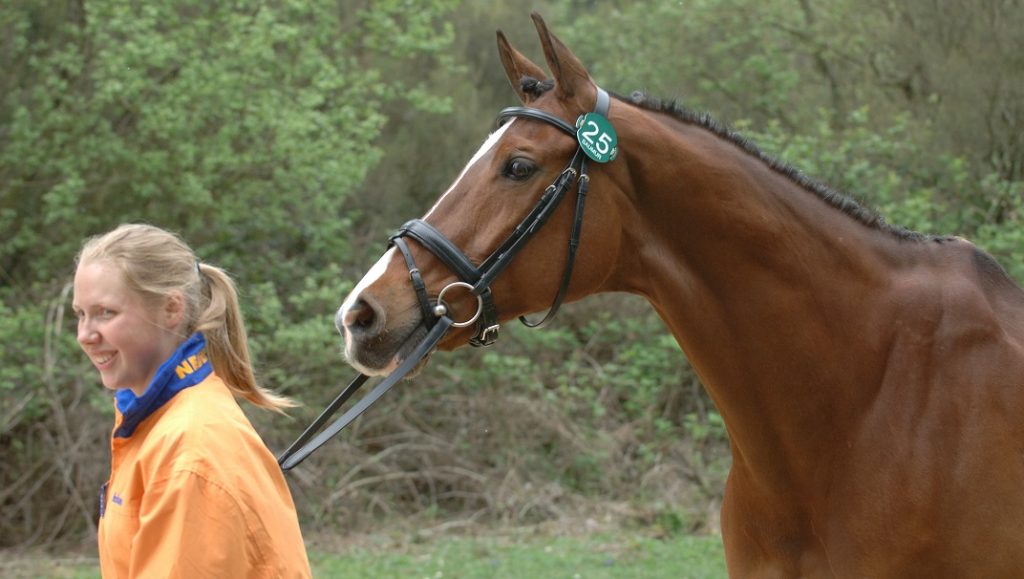 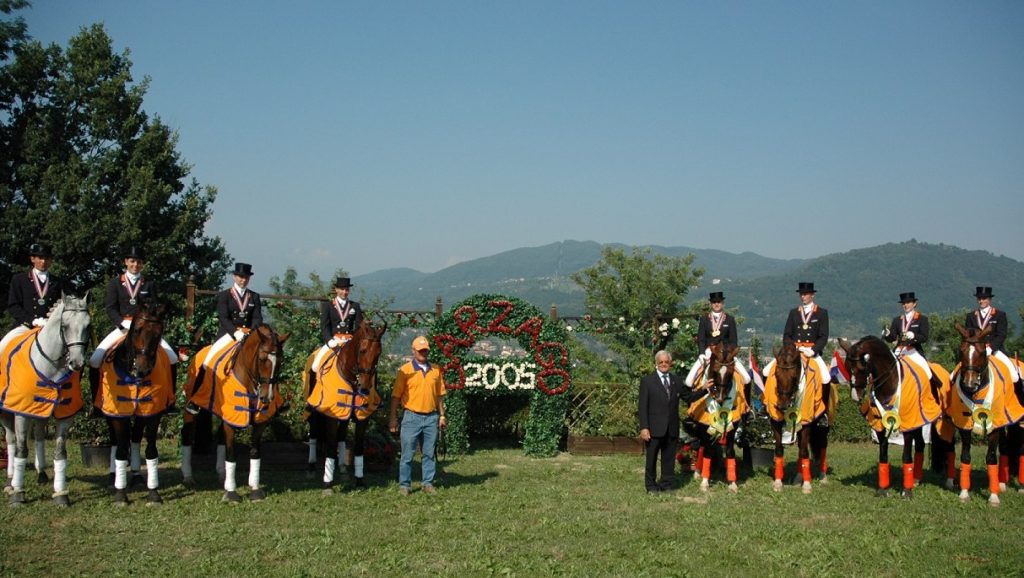 2006 was Jenny’s last year as a Young rider as she turned 21 in March and of course she aimed for a team spot again. After a very successful year, they were rewarded when in July they travelled with the Dutch team to Stadl Paura, Austria. Again they won the Silver medal and Jenny made it into the final. It was a great finale to her years as a youth rider.

Meanwhile, Jenny also started competing Proud and Popeye. Proud was bought in 2002 as a 5 year-old at the World Championships for Young Horses and Popeye was bought in 2005 as an 8 year-old. With Proud, Jenny competed in her first PAVO-cup final (their first show together). From there Jenny trained and educated Proud. Proud was not an easy horse to train, but he had so much potential and was a great mover. It took some years to control his energy. But it was all worth it! Proud won several national and international Small Tour shows. The greatest success was their win and second prize at the 2010 CDI Strassen, Luxembourg, where Jenny also was named “Best Foreign Rider”. In 2013 Proud was sold to Jenny’s student, Suzanne, to be her “schoolmaster”.

Popeye already was competing at National level when he came to the stable. He was bought with the intention to have a second Young rider’s horse to compete. Jenny took him to their first ZZ-Zwaar show only three weeks after they started training together. They won one test and were second in the other. Popeye was the perfect ‘wingman”. Jenny would take him and Kennet to numerous national and international Young rider-shows together. Unfortunately, Popeye suffered from an injury and we had to let him go in 2013.

After her Young rider period, Jenny competed with Kennet, Proud and Popeye at Small Tour level. The transition to Grand Prix proved to be a difficult one. That is why Jenny’s parents decided to look for an experienced GP horse to teach Jenny. After a long search, they found Krawal at the end of 2008. He was already 16 years old, almost turning 17, so they bought him with the idea to compete in one or two years’ time. This turned out totally different! Krawall competed until he was 20 years old. In 2009 the combination made their Grand Prix debut at a national show in Kootwijk. From then on their career took a flight. In 2009 they were the youngest competitor with the oldest horse at the Dutch Championships in De Steeg. They first competed nationally, but after a while they decided to try international shows. In the three years they competed, they won several national and international shows. Not only were they allowed to compete at CDI3*, after a while they were invited to CDI5* and World Cup qualifications. The highlight of their career was competing at the World Cup Final in ‘s-Hertogenbosch 2012. Because of all the successes, they got a spot in the Dutch B-team and were a member of the RaboTalentenTeam (Rabo Talent Team) in 2010. In 2012 they were responsible for a fourth spot for the Dutch Team at the London Olympics. With their top 20-spot in the World Ranking and multiple 4th places at World Cup Qualifiers (Odense, Denmark and Gothenburg, Sweden), they earned a spot on the Olympic long list of the Netherlands. Unfortunately, Krawall was injured only a week before the last qualification, and that meant the end of his career. In 2013 Dressage Stable Schreven was the scene of the Jenny Schreven and Friends fundraising event. Here, Krawall and Jenny had their final ride together in public. Now, this gorgeous horse is enjoying his retirement (so is Kennet) in the fields of Dressage Stable Schreven. 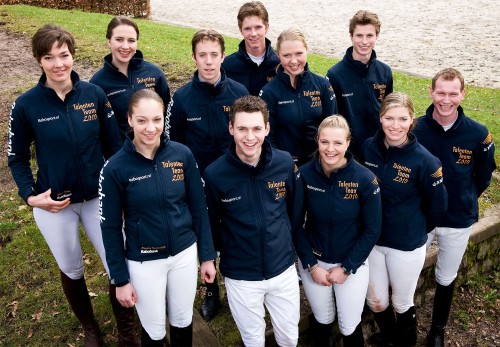 After Krawall a new star was found in Wings. Wings first came to the stable as a 6 year-old with his owner Katja. She had already trained with Jenny for several years and together they found Wings. Wings showed talent from the very beginning. When Katja started studying, Jenny took over the reins. They won several national shows at Small-Tour level and went to the CDIO Hickstead in 2014. Wings is now in training to make the transition to become Jenny’s next Grand Prix horse.

In 2010 Finnegan and Fiorello came into Jenny’s life. They were two talented foals who would grow up to become two gorgeous horses. Finnegan is Jenny’s newest competition horse. Only 7 years old, he is already proving to be a superstar in the making. He is competing at Z2-level and has already won several shows. Jenny will keep training him and is looking forward to seeing him progress.

Although it seems Jenny had no spare time left, she had to use some of her time to finish her education. In 2004 she finished high school. After that, she started studying at NHB Deurne. A school specialized in horse-related education. In 2007 Jenny graduated with distinction and got her teach-certificate. Because Jenny’s ambition is to learn as much as possible from dressage, she decided to start judging. In 2009 she started at the lowest level and after numerous exams and courses she is now a graduated Small Tour and Freestyle judge. Jenny enjoys the various aspects of riding, teaching and judging, a lot. For her it is a nice way to contribute to the Dutch dressage sport and the education of young children.